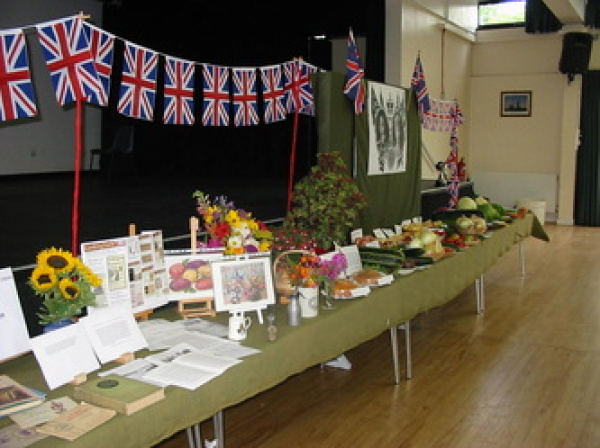 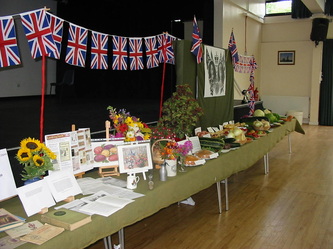 Back in June we took a look at the first fifty years of Shoreham’s Horticultural and Allotments Society. Now we continue to follow the society’s development into the second half of the twentieth century. In the 1950s there were three main shows a year, with seven meetings for members to attend and three for beginners, to encourage more people to take up gardening.

The 1950 summer show in August featured a fur and feather show. Held in the marquee at Buckingham Park, it was run by the Shoreham Poultry and Rabbit Club. Among the breeds of rabbit on display were the short-coated Ermine Rex, the Chinchilla, which has grey fur similar to the rodent of the same name and the Belgian Hare – which aren’t hares at all, but an athletic looking rabbit. That year there were also sheep dog trials in Buckingham Park and the usual fun fair. A new event was the screening of some religious films by the Methodist Mobile Cinema, which was housed in a van.

1950’s August show had been on a swelteringly hot day, but the following year heavy rain meant fewer visitors than usual and sadly the show made a financial loss. Members of the society then busied themselves holding a series of bring-and-buy sales of garden produce and a jumble sale to raise funds and the Shoreham Boat Owner’s Association sent a donation towards putting the Society back in the black. 1951’s Chrysanthemum show was run in association with The Sussex Beekeepers Association annual honey show. In 1952 the summer show was a modest affair, but it was back to a full-scale event in the park in 1953, when great weather once again brought the crowds flocking. This show included the crowning with flowers of Shoreham’s first Floral Queen and attendants, by the Chairman of the Urban Council,

In an article in the Shoreham Herald in 1957, which was definitely of its time, it was suggested that a housewife should be the judge of the vegetables at the shows. The chairman of the society didn’t agree however, believing that housewives of Britain were not always the most discerning when it came to vegetable shopping.

On the August Bank Holiday of 1961, several thousand people attended the Buckingham Park flower show and cage bird show. About 1,400 people paid to watch the sheep dog trials and 1,300 visited the flower show marquee. There were also three sideshows run by Shoreham Liberal Association and a static display by the Royal Sussex Regiment Of The Territorial Army.

In 1964, the society’s current President Barry Hillman joined and won two cups at that year’s summer show. In 1965 the Shoreham scouts constructed a rope bridge in Buckingham Park on the Bank Holiday Monday, allowing hundreds of visitors to cross it. The exhibit had to close temporarily when two youths caused a supporting timber to snap, but it was repaired in time for others to enjoy.

Heavy showers in 1966, after the August show had begun, encouraged 100s of people to cram into the marquee and view the exhibits. That year the autumn show was held at Victoria Road Primary School for the first time. The 1967 early summer show had a class for strawberries, but poor weather preceding the event meant there were no entries at all on that particular fruit that year. For those looking for something a little different, the early summer show of 1968 promised a mounted display of ‘insects injurious to the garden’. There is no record of exactly what specimens were on display. Presumably aphids would have been a little small to exhibit. Keeping with the instructional theme this show also contained a display showing the germination stages of broad and French beans.

In 1973 children’s classes were added to the Flower and Vegetable Show to encourage local schoolchildren to take an interest in plants and gardening. Pinks and carnations were now becoming less popular in terms of number of entries but roses and fuchsias were increasing in numbers among the plants exhibited. Topically, Society Chairman expressed the view that with the advent of the Common Market allotments in the district would become scarce.

A plant sale was introduced to the 1974 summer show and became a regular annual feature. In 1976, classes for vegetables were added to the autumn show and in 1981 beginners’ classes were introduced for those who had not exhibited their produce before. Although the summer show of that year, in a marquee at Buckingham Park had been very well attended, the society was having trouble recruiting committee members and this made it fear for is future for a time. Fortunately new members did join and Shoreham Horticultural and Allotment Society is still flourishing in 2019, its centenary year. This year’s autumn show is on Saturday 12th October from 12 noon at the Shoreham Centre in Pond Road. As always everyone will be welcome to go along and enjoy the displays of flowers, fruit, vegetables and much more.